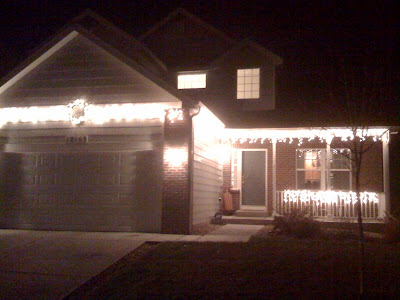 Yes, we did it! November 7, 2008 we became the first family in our neighborhood to put up our Christmas lights. Cross that one off of my list of life long accomplishments. I try to keep the bar pretty low.
Now why on earth would I put my Christmas lights up so early you may be asking yourself. First, I like to refer to them as winter lights so let's not be exclusive here. Second, have you ever put winter lights up at the end of November? It's not only a time consuming experience, but it's dang cold and quite miserable. By planning a few weeks ahead I can avoid the wrath of Jack Frost. Finally, it seems as soon as you put them up it's time to take them down. At least this way I can enjoy them just a little bit longer.
For those of you reading this blog post that put up lights around the holiday season just admit it you're jealous. And now you're thinking to yourself, maybe I too should put my lights up sooner rather than later. That's right, give in to the temptation. The season is upon us.
Posted by Matt at 7.11.08 15 comments:

Is The Media Liberally Biased? 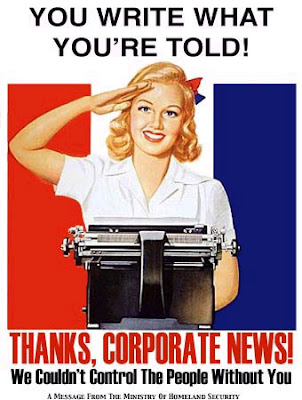 This is a question that is often heatedly debated by the general public and one of which I feel qualified to write on since I ran a web department for CBS News for over 3 years. Today I went to the websites of the "5 Major" news operations in the United States and captured what the headlines were that displayed for both Republicans and Democrats at the top of each website's homepage respectively. Here are the results:

3) Bachmann: Talk Show Appearance ‘Big Mistake’ (about a Republican who made an ‘anti-American’ Obama comment on a talkshow)

2) Obama has a Trump Card

1) Obama Boogies Down on ‘Ellen’

Republican Based Headlines On Front Page:

Democrat Based Headlines On Front Page:

So there you have it folks. I think it is obvious that Fox News leans more to the right more than the other news agencies, but that being said the main headline on their site was "Obama Grabs 9-Point Lead," which is very pro-Democrat. The other 4 News agencies clearly have a liberal agenda as almost every headline puts the Republican party in a bad light and makes the Democrats look good. There are several serious issues in this election that could have been brought up in regards to the Democratic party, but the general media (with the exception of Fox News) has avoided reported them.

For those of you who are unclear as to how stories are chosen to be reported on the news let me briefly explain. Reporters seek out stories and pitch their ideas to the News Director who ultimately decides if it is "News Worthy" for the general public. That's it! Yes, that's right one person ultimately decides what he/she thinks you need to hear. The news business is not a democracy, it is a dictatorship and the blind public puts their trust in biased dictators.

When I worked in the news there was a quote on the wall from Hunter S. Thompson that read:

"The news business is a cruel and shallow money trench, a long plastic hallway where thieves and pimps run free, and good men die like dogs. There's also a negative side."

This statement couldn't be more true and it ultimately was the reason I abandoned this career path. This being said, there are good people who work in the news business and I'm friends with a lot of them, but until the process changes in how the news is reported it's important to seek out the truth and not be blinded by sensationalism. The news business has done a huge disservice in this upcoming presidential election and a lot of people have had the wool pulled over their eyes because of it.

To quote a great 90's television show and to end this post in conspiracy theory type fashion:

The Worst Music Video Ever!

So yesterday I posted a music video that I thought could quite possibly be the worst video ever made (If you haven't seen it yet you'll want to make sure that you do as it will most definitely make your day!).
Today I discovered that I was wrong. Unless someone can show me otherwise, I am quite confident that this is the worst music video ever made.
Posted by Matt at 23.9.08 8 comments:

I don't even know where to begin with this post. I mean can words describe how much this video made my day? This has got to be the best web video in the history of web videos! Wow! I am left utterly and totally speechless.
Just when I think I've seen it all.
Posted by Matt at 22.9.08 6 comments:

What Is This Baby Saying? 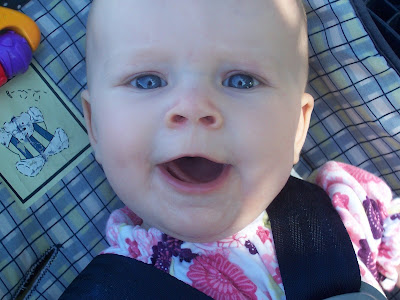 The other day Mindy was at the park with Lou Lou and Tu Tu and took this picture of the little one. When I saw it I couldn't help but laugh as her facial expression cracks me up.
I couldn't help but wonder what on earth she was trying to tell her mother and so now I give you the opportunity to provide the caption you see most fitting.